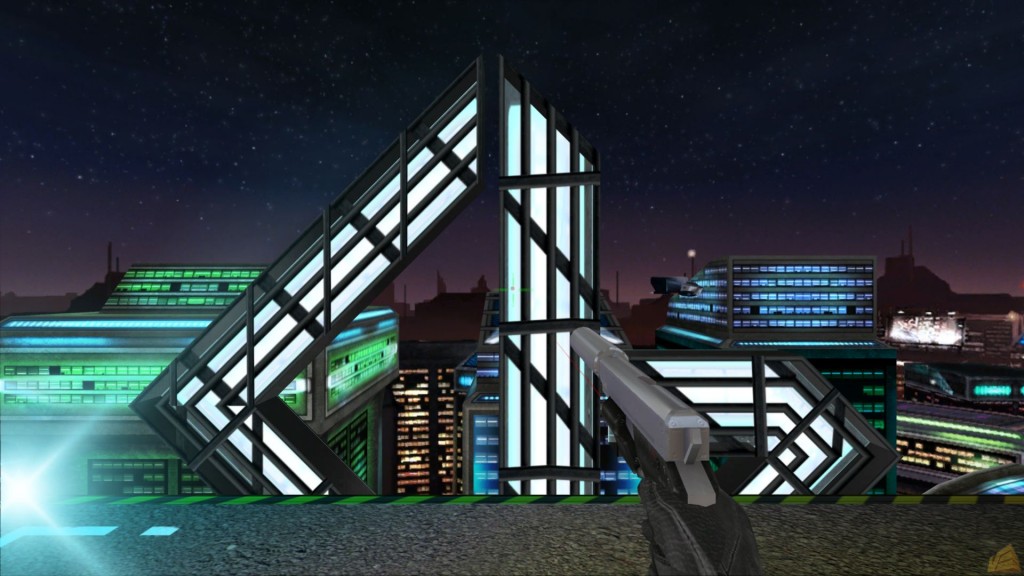 “They say when you sleep you dream of being me,” she says, moving a finger down the sweat of the tumbler. The mute torrent of Tokyo rain on the glass walls smudges neon in broad strokes across the skyline.

The glow of the bar lights the shadows of his face, angular, his eyes barely readable.

“Are they correct?” she asks, shifting on the bar stool, removing a clip and placing a Falcon on the bar beside her glass.

“I might have, once. In your heyday,” he says, leaning further into the bar. “Out there when you were more of an idea than an execution, when your environment didn’t quite live up to your values, when your words didn’t quite match who we thought you were. Back then, you were new, exciting, challenging, a woman who wasn’t like the archaeologist. The very idea of you in a navy suit with a silencer and a crop-cut. The very idea of you was seductive. It was enough for you to awake in a rainy Chicago noirscape and see robots on the horizon; flashes of red. Now, when I look at all my past indiscretions… I do dream of being you sometimes. I dream of being an icon that has nothing to prove, like you do. I have been around a long time, my friend.”

“When you were young,” she says, and smiles slowly as the ice melts in the single malt, “you were the most handsome of them all.”

She can see a strand of grey in his full head of dark hair, and she winces just enough so that he sees it.

Her taut pale skin, her large, piercing eyes, her tall capable stature, her little pixie cut settled playfully on her head. She is still young because the very memory of her is fuelling her existence, strengthened by Perfect Dark Zero, but not in the way they wanted. She is womanly, but not in a judgemental way. She is almost androgynous, but not apologetically so.

“The thing I admired about you,” Bond says, as he lifted his drink to his lips, “is that you never wanted to be a man.”

She laughs. “Oh I longed to be a man. Do you know I get on the ‘sexiest’ lists to this day? And though they go out of their ways to mark me as not sexy enough by far, I am still rated by my looks and not my multiplayer. My multiplayer was better than yours! And still they’d say, oh Goldeneye, Goldeneye’s the one. It has the realism. The realism and no man in a flying laptop.”

Bond raises an eyebrow. “They would bring up the laptop.”

“The laptop wasn’t my idea! I just had to work with it. Look: the truth is, I knew I’d be measured by who I was against you. But you predated Goldeneye. You came with a lot of goodwill. People wanted to be you. They never wanted to be me. You had preordained missions, I was doing them for the first time.”

“I remember your gloved hands,” Bond says, gesturing to the barman for a martini. “Like Counter Strike Leet hands.”

“These gloves?” she says, laying black leather on the bar. Bond picks the gloves up, examines them. They still feel new. He tries to fit a hand in, but they are too small for him. She has long, dainty fingers, the sort you’d think would never strangle a man, but the sort that could. He nods.

“Sometimes the only way you could navigate DataDyne was by looking to see if there was blood on the walls from the last time you came that way,” he smiles. “I saw your mission reports. Didn’t you think Carrington was an old wretch?”

“Carrington reminded me of you,” she says. “Of you in another life.”

She has no cynicism or sharp edges; she never wanted to ‘fuck shit up’ like everyone wants women to these days, as if violent heroism were something to aspire to, rather she favoured cleanliness. The rail gun, for example, was a cleaner’s tool, wasn’t designed for massacre, rather for guerilla warfare. Pragmatic.

“The cutscenes were never flattering. I felt more myself when I was shooting people.” She sighs. “It became a farce, later, didn’t it. The Skedar. Carroll. At least you didn’t have to have a story to have people care about you.”

“My story was prefabricated, renowned. I can never retire.”

She notices that he looks a little sad now, but then he is distracted: a redhead has appeared behind Joanna. She is thinner, with painted nails, with a catsuit unzipped to her navel.